I am the first to admit that we have a lot of plastic toys in our house, and some of them require batteries. Most of those that require batteries have not been purchased by us. What I like about most of the toys we have, whether they be plastic or wooden is that they encourage creative, imaginative play. There is so much room for storytelling and role playing with toys like the little people sets, but my favourite toys are the wooden trains and the dress-up clothes.

We got Aidan his first wooden train set with a small table when he was 19 months old. It was just a no-name set with some wooden track, houses, trees, some street signs and of course a few trains. While I knew he would like the trains, and he already liked the train set at our local Chapters, for the first year it was mainly for me to play with him. When he was a little older his father and I made tracks for him but the play was all him. He had different scenarios, and often there were terrific “derailments” and emergency vehicles coming to the rescue.

Now at 4 and a half, Aidan is a track making king. Almost everyday our small living room is taken over by intricate tracks, with bridges, tunnels, switches, curves, stations and whatever else he decides is needed for the day’s mission. I am in awe of how much fine motor skills he is honing with each track he makes. The spatial reasoning he displays is amazing. He is using his hands on approach to figure out how things work, and if it doesn’t he goes on to the next idea. These tracks are ever expanding and ever changing. He will take a track in one direction and when he is finished find a way to make another really complicated piece fit in somewhere else and take it in another direction. With the amount of attention that our 1 year old Quinlan shows the trains he will be a track king even sooner than Aidan was.

We are also big fans of the “Tickle Trunk” here in the Floyd household. We have a few hats like a fire helmet, a police helmet and a wizard’s hat, as well as some home made items like the heart shaped magic wand. My favourite item in amongst the costumes is a beautiful wizard’s cape that my brother’s fiancée made for Aidan for Christmas last year. It is a beautiful deep blue velvet with stars all over it. It is even more special because she made it especially for him. Sometimes this cape turns Aidan into a wizard like the sorcerer’s apprentice, and sometimes he is a superhero. Whatever he needs it to be, it is. 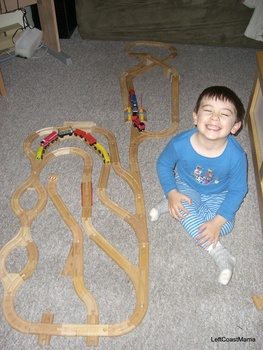 Aidan and some intricate track.

I think letting Aidan play dress up has sharpened his imagination and helped him to think outside the box. He wasn’t concerned about being Spiderman or another specific character for Halloween this year. He was happy to be an elephant like he was last year, except he decided this elephant was going to have fairy wings. I thought it was brilliant and I hope that I continue to help him to be his own person through play. I don’t want to ever squash his creativity, in fact I want him to revel in his uniqueness.

I know that it is hard in this day and age to stop ourselves from giving our children everything they want. It is even harder if the children you have are the only grandchildren on both sides of the family. In some ways I know the only reason we are not totally overrun is because we live so far away from our extended family. Both Anthony and I are trying to make the effort to really make sure that the toys we get for our sons are educational, sturdy and engage them in imaginative play. We don’t want to have our sons’ toys be things that don’t last much longer than a few days out of the box. It is an ongoing battle with ourselves and with our 4 year old. Luckily he takes the word “no” a lot better than a lot of kids I know. I also know that we are not the only ones who have these battles, we are just more adept saying “no” at times because we have no room.

What are your favourite toys for creative and imaginative play?