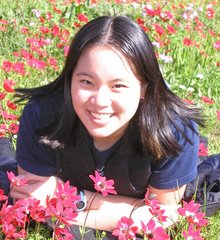 Blog to Inspire entrant From Elaine’s Brain is Elaine Unger. Being a mommy takes up most of her time right now. In her non-mommy moments she enjoys exercising, scrapbooking, baking, and reading fiction.

The image imprinted in my memory is this: my mom at her sewing machine with piles of white flannel, elastic, and Velcro around her. She’s sewing cloth diapers for my youngest sister.

Fast-forward 20 years or so and I’m at my mom’s house eagerly explaining how to use the cloth diapers I just bought on-line as though it’s a novel idea. I stop mid-sentence and laugh in amusement. I’m explaining to HER how to use cloth?

When our firstborn son M was about 9 months old and we came out of the fog of infancy and the frustrations of resolving his acid reflux, we decided to consider using cloth diapers. Each week since his birth I watched my garbage can fill up and cringed knowing that the majority of the garbage was diapers. A twinge of guilt would trigger inside me, yet I didn’t feel like I had the capacity to do anything about it at the time. The days were so chaotic that I couldn’t take on anything else. And even though I’d seen my mom sew and use them for my youngest sister, the idea of cloth diapers was daunting. It just seemed easier to use disposables. (As hubby said, “Like we need more things to think about?”)

But then we arrived at a phase of M’s life where we had a good rhythm to the day and I felt sane more often than not. The time had arrived to at least give cloth a shot. My background in science initiated an information gathering process where I played the role of skeptic and let the evidence convince me. I read all sorts of information on the pros and cons of cloth versus disposables from sources that weren’t skewed by trying to make a sale. Some were certain of the benefits of cloth to the environment while others argued that the impact of extra water and detergent used for washing balanced out the garbage accumulation. I was pleased to learn about health benefits (less diaper rash, for example) and allowed my thoughts on the amount of work involved to be addressed. In the end, I was convinced. And not just convinced but excited to get started using cloth! My goal was to find some diapers that we would consider to be an investment both financially and environmentally, without causing too much stress in the convenience department. We would give cloth diapers a fair trial and find something that fit M and our lifestyle.

It was hard to know where to start since there seemed to be an overwhelming number of options and brands and a whole lingo to figure out. My friends T & J were my cloth diaper catalyst (also known as “friendly kick in the butt”). They used them exclusively since their son was a couple of months old. T & J gave me a few suggestions and, of course, hubby and I also had personal preferences and requirements too.

The diaper laundering process was a bit intimidating at first. There seemed to be a lot of things to remember: rinse cold, wash hot, rinse cold, minimal detergent… oh, and run the laundry often enough that you don’t run out of diapers! But eventually, that same intimidating process became routine.

We tried a few different types and brands before we decided that pocket diapers with snaps were our favourite: easy to use, low on the handling of bodily fluids (hubby’s requirement), quick to line dry (we rarely used our dryer at the time; didn’t make sense to start using it for diapers), and they fit M’s body well. We were sold! We bought enough to use cloth diapers full-time.

Okay, let’s be realistic. I don’t want to sound like we just rode off into the sunset with no issues at all. There was a transition period, a few leaks and frustrations, and a couple bumps along the way. Baby number two came along and now we have double the cloth diapers. We have figured out that what works for our family is using cloth about 90% of the time.

It’s fourteen months after we started our trial and we’re still glad that we decided to switch to cloth. Maybe this is the image my son will have in his memory: M is helping me do laundry and passing me the diaper liners. I’m stuffing them into the pockets. Here’s hoping that he’ll pass the torch too.