Blog to Inspire entrant Code Name: Mama is Dionna Ford, a lawyer turned work at home mama to an amazing son. She’s also one of those crunchy liberals her parents warned her about. She and her husband practice natural parenting and try to live consciously. 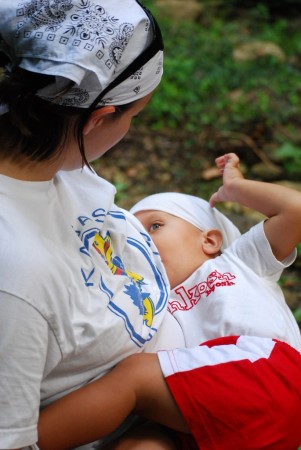 A member of an online community forum recently asked: “Do you think toddlers are too old to nurse?” What followed was a variety of disapproving comments regarding breastfeeding in general and “extended” (better known as “full term”) breastfeeding in particular.

I joined the community in order to educate the ill-informed and defend those champions of lactation – the mamas who give their babies breastmilk beyond one year. I dug up some research on breastfeeding past infancy; found links and statistics; and attempted to write something coherent. (It’s hard to be coherent, though, when my almost two year old often climbs onto my lap, dives for my nursing tank top, and does scissor kicks somewhere between my body and the keyboard.) Below is an expanded version of what I posted in response.

Health Benefits to Children and Mothers

Much of the criticism toward extended breastfeeding has nothing to do with health and everything to do with cultural biases. Many disagree with nursing a toddler who “can ask for it (or who have teeth),” or “when it’s just used as a comfort.”

Such comments reveal the writers’ own discomfort; they are not grounded in fact. Disapproval based on comfort level is not a logical basis for discouraging mothers from breastfeeding for any length of time.

Mothers have historically nursed into toddlerhood. In fact “the median age of weaning throughout the world is between ages three and five [years].” (7) Because breastfeeding is “a heavily culturized activity, it is” influenced by the current beliefs and attitudes regarding “infant health and nutrition, . . . the nature of human infancy and the proper relationships between mother and child, and between mother and father.” (8)

Those who condemn nursing a child who is “old enough to ask for it” operate under the illusion that the breast’s primary purpose is sexual. Most people wouldn’t raise an eyebrow at giving a toddler a bottle (which is a breast substitute), or at hugging or cuddling a toddler; why should breastfeeding be different? All are forms of affection. A toddler does not see a breast as sexual, nor should anyone who happens to view the nursing relationship.

The argument that breastfeeding should be discontinued after it is “more comfort than nutrition” is similarly misguided. Aside from the established health benefits of nursing a toddler, it makes no sense to take away a food source just because it does not meet every nutritional need.

“We don’t say that children should stop eating bananas once bananas are no longer a significant part of their diet. Bananas eaten once in a while are as nutritious as bananas eaten three times a day. In fact, you might even consider the rarely eaten banana to be more important nutritionally. Why do we not see that the same is true of human milk?” (9)

Nursing My Own Toddler

In responding to the forum query and in writing this post, I examined my own reasons for continuing to nurse my son.

Nothing can soothe my toddler’s bumped head or broken heart more effectively than breastfeeding. Nursing provides Kieran security and comfort when he is feeling sad, unsure or overwhelmed. And, quite simply, we both enjoy our nursing relationship.

If I hadn’t nursed beyond one year, I would have never been able to enjoy Kieran’s impish grin before his inevitable toddler nursing gymnastics; the request for “mama milk dance!” as we swept across our living room dance floor; or waking up to his big blue eyes locked onto mine as he hugged my chest and sleepily murmured “love mama milk.”

These tender moments are memories I would never trade, and Kieran’s comfort and happiness far outweigh any possible criticism about extended breastfeeding.