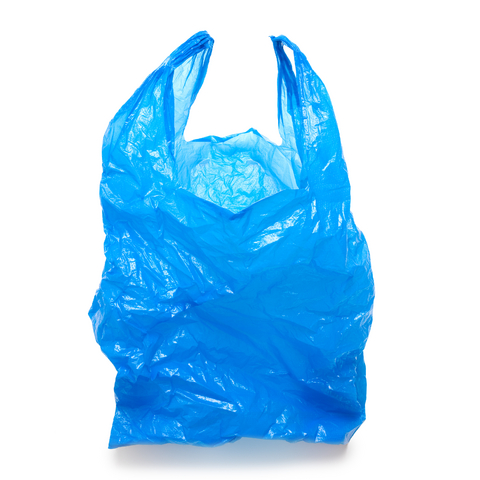 Is it a bag or is it a jellyfish? Sea life eat it to find out.

Is the logical conclusion to outlaw plastic? Probably not. My quick answer is that a ban would be fine with me, but I understand that we have built areas of our material culture around plastic. We would need a transition period to (and back to) other materials.

It may be that we have finally entered that transition period. I wrote Wednesday about those already saying NO! to plastics. And, plastic news is moving quickly. Even since I wrote Wednesday, Australia has a deal with retailers to phase out BPA (bisphenol-A) from baby bottles and the California Assembly passed a bill also to ban BPA in baby bottles. If you are concerned about the issues and want to be informed of changes, be sure to follow the work of plastic pollution activists.

Quick! What Are the Problems with Plastic?

Toxic
The basic idea: the processing and many of the products are toxic.

Toxins can be found in plastic byproducts, plastic softeners (phthalates), some ingredients (BPA), and some situational instabilities in the materials after production (meaning some plastics will break down in heat or when in contact with certain chemicals). Some of the harm is immediate, and some of the toxins build up over time. The result of “pre-polluted babies” (a phrase used in a report from the U.S. President’s Cancer Panel in May) has alarmed many into action.

Oil and gas as global power isn’t in dispute. The news gives us evidence of this on so many levels. Any business that can’t sustain its supply of raw materials, though, has to evolve or die. This probably explains why so many oil execs have gone into the algae business lately.

We can certainly expect more algae plastic in the future. When I see biodegradable plastic spoons made from corn, I wonder if I’m seeing something that is closer to the structure of rayon (turn bamboo or tree into cellulose goo through chemical treatment then pack it together like a very tight papier mache) than to petro-plastic spoons. If a renewable material is used as feedstock to make plastic, it is still has to be made into the same toxic chemicals with the same issues at each stage in the distilling (fractioning) process. So, making plastic from renewable materials doesn’t make it all nice and greenwashy clean, it just makes it a renewable source of potential toxins.

Peak Oil
The basic idea: since oil is a non-renewable resource, it is finite. We will use it up. Peak oil is the point at which we probably have already passed peak production—think, now. The reality is probably that as there are fewer cheap ways to extract oil we will resort to the more expensive and environmentally damaging ways to squeeze out every drop.

The question of oil and plastic will solve itself over time as we deal with ever-diminishing oil. Eventually, we will deal with diminishing natural gas as well.

Happiness
The basic idea: does plastic make you more happy?

The Answer to Plastic Problems

I don’t claim to have all of the answers or even very good answers, but I do have a sense that we can’t just make minor tweaks around the edges of our plastic-enhanced lifestyles. What is sneaking up on us while our lives are turned to plastic are toxins in pre-polluted babies, oceans of plastic, destruction of land and sea, landfills full of baby feces, and so on.

Small changes won’t save us. We need big changes. Big changes are completely intimidating and tend to shut us down into inaction (yes, I’m speaking for myself). So, we need to inventory our lives and ask where we can make changes. Then DO IT! Once you make a big change, it’s exciting and empowering. You can make more and join with others who are making their own changes. It’s important not to make holier-than-thou judgments if you support others making their own changes (instead of your changes). Each of us will have to figure out where and how to remove plastic from our lives.

Need a place to start? FOOD. Do not use soft plastics to store or cook food. There. Simple. What’s next?

Plastic: Get a plastic bag at the mall
Alternative: Take a reusable bag to the mall
Change: Skip the mall

To find the changes that work for you, inventory your house. What are the

One thought on “Plastic Problems – Your Choices”