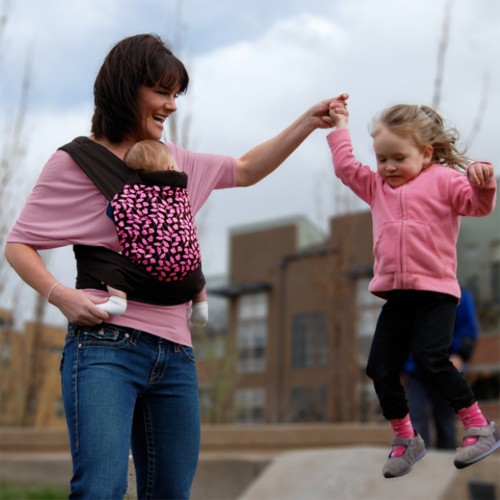 Pods and Onbus. Have you heard of them but wondered what kind of baby carriers these are? Podaegi and Onbuhimo are traditional Asian baby carriers.

There are more Asian baby carriers becoming popular in North America along with traditional styles of babywearing from Asia. These carriers share a basic structure of rectangle of fabric with straps. Here are the details.

A Korean podaegi baby carrier is wide enough to fit all of the way around the mother with overlap. There is one strap across the top with the ties coming out both sides.

A Japanese onbuhimo baby carrier has a smaller rectangle of fabric with padded ties angled out of the top corners and loops or rings on the bottom corners.

A Chinese mei tai baby carrier is currently the most popular Asian carrier in the North American market. Some widely available baby carriers like the Freehand Mei Tai are soft and unstructured more like traditional carriers. The BabyHawk Mei Tai has more padding, and the Pikkolo carrier has shaped structure and buckles.

The mei tai carrier has a strap coming from each corner of the square of fabric.

The Babywearer – A forum and review community for babywearing with a lot of user photos including galleries for Onbuhimo, Podaegi, and Mei Tai carriers.

Babywearing International – A charity promoting babywearing. They provide solid babywearing safety information and they have a few chapters where parents can get face-to-face help.