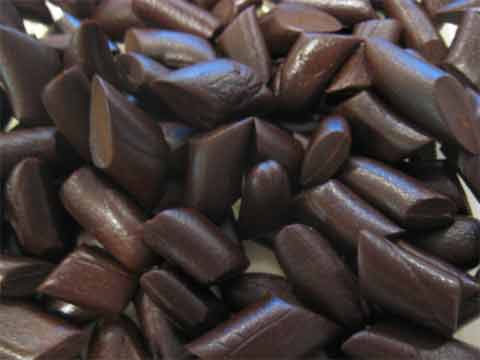 Last Wednesday, I cleaned up my overgrown herb garden. I have a whole winter’s worth of mint tea, the fresh sage went into turkey dressing that I’ll be eating in about an hour, and the fennel seeds and leaves my children convinced me would make nice licorice. 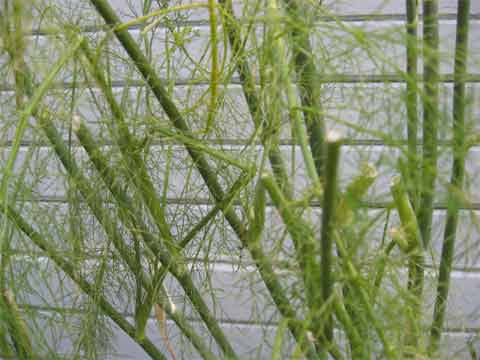 My cleaned up fennel plants

Licorice is usually made with licorice root and anise seeds. Because of the potential side effects of actual licorice root (raised blood pressure, edema, and toxicity to liver and cardiovascular system), it made sense to me to use a substitute that has common culinary uses. Fennel seed is also used medicinally to prevent gas. A licorice-like fennel candy makes a nice after dinner treat.

Fennel is much more mild than licorice, so you will need to make a very strong infusion of fennel. I used both seeds (dried for a few days then crushed to release their oils) and leaves (crushed into powder). Next time, I’ll make it stronger. 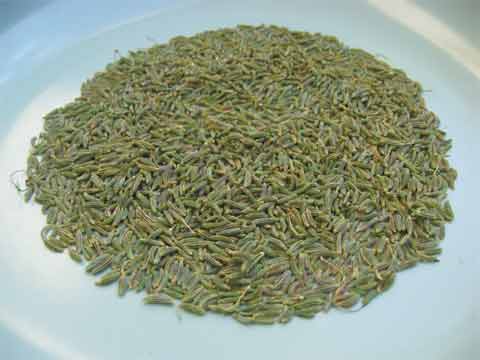 Pour boiling water over the seeds and leaves as for tea. Cover immediately and leave until room temperature. Strain.

I left the infusion overnight then boiled it down a bit to try to concentrate the flavor. Because I added the liquid to a syrup, I wish I had boiled it down more. The whole process would have been faster if I had concentrated the flavor in less liquid.

Makes about 12oz of licorice.

Mix molasses and oil in a heavy saucepan. Add liquid and mix. Use a candy thermometer to bring the mixture up to soft ball stage (~230-245 degrees F). 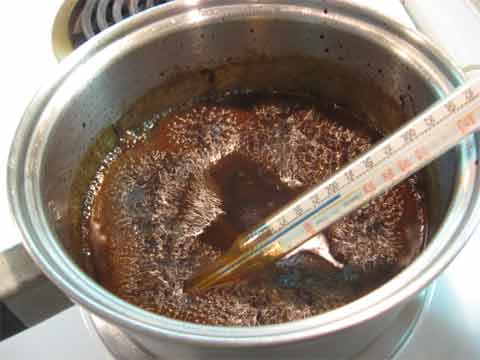 It took me about 40 minutes to bring the syrup to soft ball stage because of the amount of liquid I added. Reduce the liquid, and the process may be faster for you.

Once my slightly fennel-flavored molasses mixture held together in a ball when dropped in cold water, I removed from the heat.

Remove from heat. Add flour 1 tablespoon at a time but quickly. The longer the syrup is off the heat, the less time you will have to shape the candies.

The amount of flour you need may vary depending on humidity and temperature. When the mixture forms a thick dough that becomes difficult to stir, put a spoonful in your hand. (Be careful! It could still be quite hot.) If you can roll it in your hands without it sticking, it’s ready to roll out. 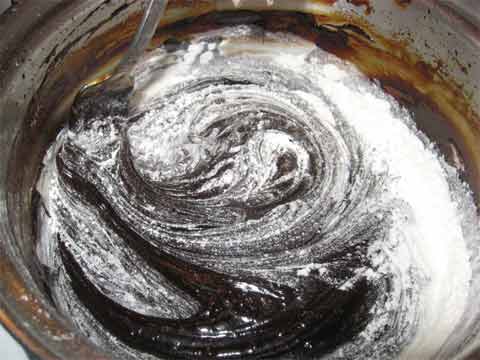 Use a heavy metal spatula to scrap all of the mixture onto your working surface before it can harden onto the pan. (I didn’t.) Break off a couple of tablespoons at a time and roll in your hands to make 1/4″-3/8″ wide ropes. 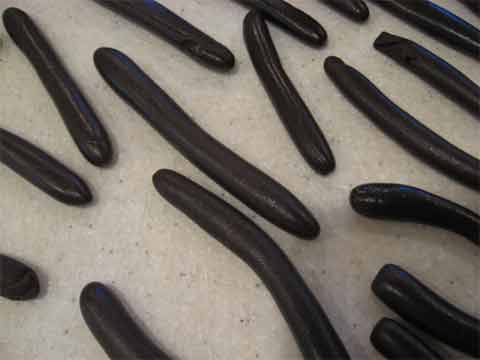 Licorice ropes about 4 to 6 inches long

I had helpers, and we still lost about 5% of our mixture on the edges of the pan due to our slowness.

We used the candy stuck on the pan to try a version of the licorice water that my children have wanted to try from the Just William stories thinking might work better than the version with modern, store-bought licorice. Around the time of rationing during World War II, licorice was one of the few sweets that children could get, and they got creative in making sweet drinks. It was horrible, according to the children. I think they just don’t have a concept of how what is sweet has changed over time.

Once you have all of the licorice in ropes, use kitchen shears to snip them into ½” pieces. These look just like the licorice I used to buy as a child. 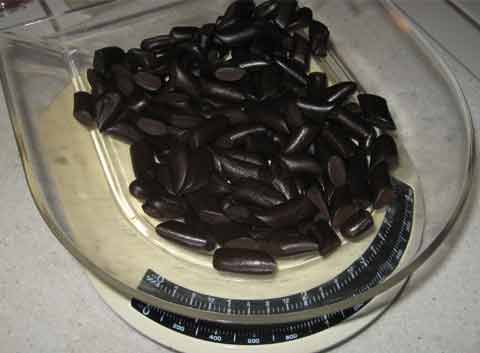 My daughter very diplomatically asked if she could finish her fennel licorice later and said that it was probably a very adult taste. She’s probably right. The flavor is intense. This is not the hard gelatin goo that generally passes as licorice. With the only sweetener being reduced molasses, it is a bit bitter but it tastes great to me. My husband said it’s kitchen magic.

To make the flavor more palatable to a child, you may need to use sugar or some other sweetener. Many recipes recommend rolling licorice ropes in powdered sugar to keep them from sticking to one another, and that would lighten the flavor a bit.

Or, help your children develop a taste for less sweet treats. That’s my plan. One little piece of fennel licorice after dinner will seem like a treat. Both children have agreed that it would be easier to see a small piece as a flavorful treat.

As the season of horror and candy (and horrible candy) approaches, I’ll post a few ideas how to deal with the onslaught and avoid the sugar jitters.