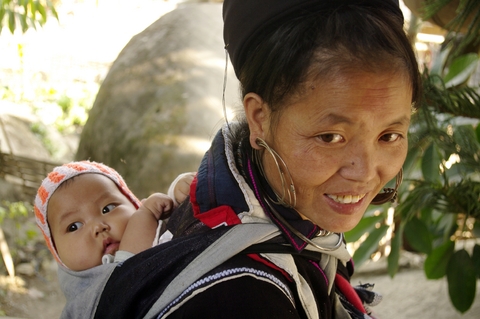 A Black Hmong woman carries her baby on her back

International Babywearing Week celebrates babywearing around the world. New innovations is mass-marketed baby carriers often have their roots in long traditions. Really, carrying a baby is quite simple. Women use what they have to hold their babies close while they go about their busy lives.

In the end, the differences in traditional baby carriers around the world are minor.

Asian baby carriers are generally a square or rectangle of fabric with straps to tie around the mother.

Both the Mexican rebozo and the African kanga are simple rectangles about the size of a baby blanket or a shawl (since they are shawls, after all). These simple pieces of cloth can be worn in many ways, often with two shawls—one around the mother’s upper body taking the weight of the baby’s bottom and one around the mother’s middle holding the baby in snuggly.

Even the 19th-century plaid (Scottish great kilt or Earasaid) that my husband has from his family was used as a baby carrier by Scots women.

Where cloth is less common, we find solid carriers like cradle boards and baskets, which women tie to their bodies, hang from a tree, or even hook over a horse’s saddle, in the case of a Navajo (Diné) craddleboard.

Wearing a baby rather than carrying in arms or not carrying at all was practical, but the results of our ancestors 2.2 million years ago creating slings for their babies were that development continued outside the womb. In a recent book, prehistorian Dr. Timothy Taylor found that attachment to mother by a sling and the safety that brought meant development of bigger brains.

Yes, that’s what I wrote, and here’s what he said, “Courtesy of the baby sling, our ancestors got smarter.“ Taylor finds that the baby sling is one of those technologies that changed the course of human evolution.

To see the amazing variety of ways that women carry their babies around the world, see this great Flickr collection of babywearing around the world. There are 400+ images, so sit back and enjoy the slide show.

One thought on “Babywearing Around the World”