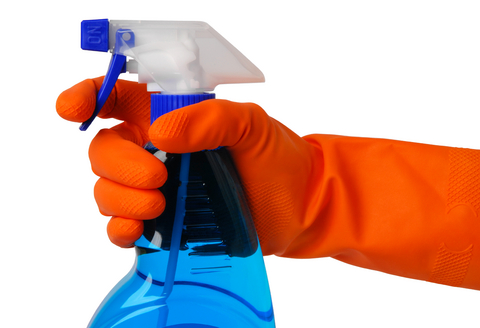 Antimicrobial cleaners and treatments—disinfectants—kill bacteria, viruses, and fungi, but they also have potential harmful health and environmental effects. They don’t distinguish between good bacteria and bad bacteria. But, a lot of people continue to use antibacterial household products that promise hygiene and safety. Everyone wants to be safe, don’t they?

Use of disinfectants such as nano silver in everyday situations is overkill. Even in more extreme situations, there is a lot of debate about whether the antimicrobial benefits outweigh the potential risks.

Nano silver is not new but it has been used in more household products in the past decade, so concerns have seen more publicity. It can be embedded in plastics (pacifiers and baby bottles), coated on textiles (anti-bacterial socks or baby products), and even added to soaps labelled “all natural” (though it is banned in Canadian organics).

The U.S. EPA is considering an application to register nano silver as a pesticide, which the Natural Resources Defense Council vigorously opposes as “illegal, irresponsible, and potentially dangerous to the public.” Unfortunately, the application to use nano silver as a pesticide is just a clever way to keep it on the market until a final decision is made. Nanomaterials are regulated by Environment Canada as pollution and waste.

Though marketed by some as an alternative cure-all, even most alternative medicine practitioners warn against claims made for unregulated medicinal silver use.

Nano silver particles are super small, 1-100 nanometers, which is a lot closer to the size of an atom than to the width of a hair. Their size means they can penetrate and accumulate in tissue. Particles coating fabrics don’t necessarily stay on fabrics. Since the particles are too small to be filtered out during the wastewater treatment process after they have been freed from antibacterial soap or socks or diaper bags or towels or even washers, the particles stay in the water after they wash down the drain. These antibacterial particles could even kill microbes used in wastewater treatment. Once these nano particles are released into the waterways, aquatic life will encounter them. A study of the effect of nano silver on zebrafish “found that some died and others were left with dramatic mutations.” Studies find problems in plant life with nano particles in soil.

Given that nano silver can have an effect on the immune system, cause neurological problems, result in kidney damage, and boost greenhouse emissions, it looks like a threat to public health.

Too many disinfectants do the job so well that they harm more than the bacteria they are intended to kill. It’s like using a sledgehammer for a push pin. For cautions and alternatives to heavy-handed disinfectants like chlorine bleach, Triclosan, and nano-silver, read Disinfectant Overkill from Women’s Voices for the Earth.

Reduce toxins and potentially risky new technologies hidden in household products by making your own cleaners. Women’s Voices for the Earth has a room-by-room guide to reducing disinfectant exposure.