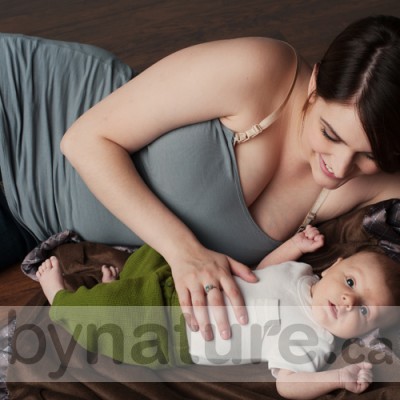 Because of the hormonal changes in your body, your breasts may get larger during pregnancy. Increased blood flow can make them feel tight or swollen. If you experience breast sensitivity before your period, you may have a similar, stronger feeling during pregnancy. You may even see some discharge, as your breasts create colostrum in anticipation of your baby’s arrival. The most noticeable physical change is in fullness of your breasts.

After your baby is born and breastfeeding is well established, you will notice the change in fullness and size. As your breasts fill with milk, they become fuller and firmer. When your baby empties one breast, it will look and feel noticeably softer. If your baby stops after one breast, you will probably look a bit lop-sided until the next feeding. As you breastfeed, your breasts will change in appearance and feel.

Several physical changes are happening. The milk-producing structures of the breast fill and empty, creating firmness and softness. Milk production results in denser breasts, which does mean some increase in size. For all women, though, fat cells determine breast size. During pregnancy, our bodies put on fat to support the pregnancy and breastfeeding. Part of the increase in breast size is just about fat—and, lest this isn’t clear in our fat-obsessed culture, that is a very good thing. Breastfeeding can reduce overall fat stores for some women, but it isn’t a given that you will lose the pregnancy fat after your baby is born. Another change that happens with the appearance of your breasts when your skin stretches. Some women get stretch marks; some women just find that their skin doesn’t feel as tight; and, yes, some women find that their breasts sag.

Sagging breasts aren’t caused by breastfeeding, though. A study found clear factors in sagging—age, significant weight loss, higher body mass index, large cup size, number of pregnancies, and a history of smoking—but breastfeeding, weight gain during pregnancy, and lack of upper body exercise were not among the causes. So, no, breastfeeding won’t cause your breasts to sag, though stretched skin might contribute to sagging.

Experience varies quite a bit between pre-pregnancy to post-breastfeeding breasts. You could return to almost the same size and shape you had before, your breasts could shrink and sag, or you could go from being flat-chested to abundantly busty (as I did).

To support your breasts and prevent unnecessary changes, wear a well-fitting bra during pregnancy and breastfeeding, even at night. This isn’t a necessity for health, but it can make a difference to post-breastfeeding appearance. Larger breasted women need a lot more support, and smaller breasted women can be fortunate enough to need no more than a breastfeeding top with a built-in bra. We carry Bravado Bras as well as Glamourmom and Undercover Mama nursing tops because these are the products we found helpful ourselves.