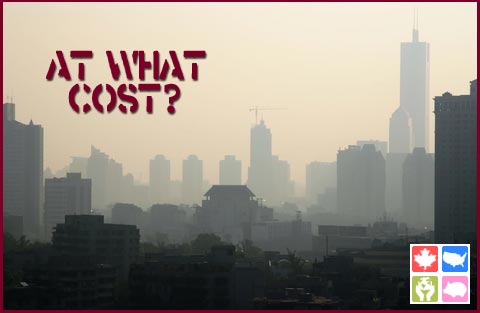 Products made in Canada or the U.S. are produced in compliance with strict regulations. When you buy imports, you have few assurances that making the products did not cause local harm through air or water pollution. Damage to environment and to health through the environment are part of the real cost of imports. We pay now, or we pay later, but we will pay.

Give It to Me Quick

When we buy products made somewhere without tight environmental regulations, the price we pay doesn’t cover the costs of environmental damage. Those costs are paid by the state of origin, the local community, and the workers.

Part of our personal impact includes the real environmental costs of the seemingly benign products we let into our lives. Making stuff has an impact, and sometimes that impact is far greater than it needs to be.

Implementation of NAFTA (North American Free Trade Agreement) in 1994 meant a de-industrialization of Canada and the U.S. while factories and jobs moved to Mexico. Despite a Commission for Environmental Cooperation between the North American countries, pollution in Mexico was immediate and overwhelming near maquiladoras—factories in Mexico near the U.S. border producing goods for export.

Mexico, though, was an issue of the 1990s; in the past decade, industry and concern has shifted to China. Environmental impacts of moving industry to Mexico pale in comparison with impacts of massive growth in China.

Pollution in China is epic. Severe pollution not only creates an economic burden for the Chinese people, it threatens political stability.

Pollution is only part of the problem. Biodiversity loss, deforestation, and desertification over 30% of China’s land signal long-term problems. It isn’t just that growth is unsustainable; Chinese growth is sending them careening toward collapse. Chinese citizens certainly aren’t unaware of the impacts of these factories, and some protest. Especially since the 2008 Olympics, the Chinese government has turned to environmental regulations and adjusted growth philosophies to lessen the impact of massive growth on their people.

It costs to make extraction and production processes cleaner. When those of us who live in places with tight environmental regulations take production to a place that doesn’t impose those regulatory costs, that means the price of the final product won’t have to cover the cost of environmental damage.

That doesn’t mean there is no cost to that environmental damage. Costs are simply externalized. Externality is a common concept in economics whereby the producer does not directly incur the inevitable cost. A business maximizes profits by forcing the problem onto someone else. In the case of pollution, the state might pay for clean up or for other consequences, the local community might pay through lower quality of life, and the workers might pay with their health.

When a Japanese chemical factory exploded in September, it became global news because of the chemical they make and how much they make of it. Nippon Shokubai Co makes 20% of the super-absorbent polymers used in disposable diapers globally. The focus of news stories was an anticipation of disposable diaper shortages around the world, but the rest of the story was the local environmental impact of an explosion and fire so big that local people thought it was another earthquake.

Some choices leave a child’s environmental impact higher than others. Using cloth diapers means avoiding the 8,000 disposable diapers you would have used and the waste they generate both as 3% of all municipal solid waste in the landfill [Lehrburger] and in production overseas where lax or non-existent environmental regulation allows companies to shave their costs through pollution.

Use any reusable diaper, even a cloth diaper made from oil or gas (polyester, PUL, microfiber, and so on), and you will lower your baby’s environmental impact. Make smart laundry choices, and you will lower the impact more. If you buy organic cotton prefold diapers with diaper covers made here in Canada by Bummis, you lower your impact even more. You don’t avoid all environmental impact of a child by choosing cloth diapers, but you lower that impact significantly.

The Institute for Sustainable Communities

For 20 years the Institute for Sustainable Communities has been helping communities around the world address environmental, economic, and social challenges to make their own community more sustainable. They train and inspire local people to improve quality of life.

Through the Environmental Health and Safety Academies in the provinces of Guangdong and Jiangsu where most Chinese manufacturing takes place, they are training thousands of factory managers every year in best practices to lower environmental impacts and boost efficiency through safety.

They want donations. The work they do isn’t simple. “We are not interested in quick fixes. When you give to ISC, you invest in lasting solutions to the climate change crisis.”

What You Can Do

Only buy imports if you know something about their manufacture. Favor products and brands that aren’t externalizing environmental costs by outsourcing to countries with loose environmental regulation.

Lower your overall impact with a focus on the three areas that account for 70-80% of the global total of environmental impact: transportation, food, and home energy.

More in this series

4 thoughts on “Imports at What Cost? Environment”