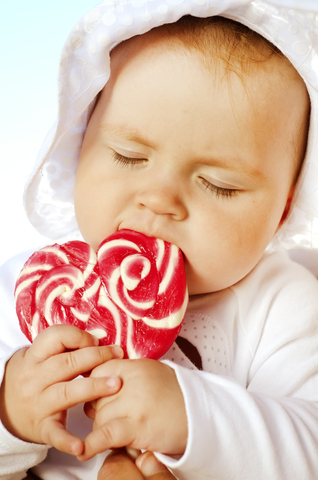 Several articles and studies in the past week give even more reason to consciously and relentlessly reduce sugar in your family’s diet, especially in the diet of your children as they grow and develop.

Statistics Canada reports that the average Canadian consumes 110 grams (or 26 teaspoons) of sugar a day. That’s over half a cup of sugar a day. Why not just wake up to a glass of water and pour in half a cup of sugar. Mmm. Sounds, well, terrible. Even if the number is half that, as the Canadian Sugar Institute claims, it seems high when you translate that into 44-88 lbs or 20-40 kg a year.

Just pause to visualize that much sugar. Not so appetizing all at once.

That fact is, the average North American is eating a lot of sugar.

This past week, National Geographic and TIME magazine published features on sugar, and a new study from the University of Utah suggests that the effects of sugar are far more than just weight gain.

What Is the Effect of Sugar?

2. Sugar leaves you without enough energy to exercise away the extra calories it leaves. Double whammy.

3. Sugar’s effect on your body is addictive. Sure, the immediate effect is pleasurable, as is the effect of cocaine or heroin, but most of us know enough not to slide down that slippery slope.

4. Sugar is toxic to you. To quote TIME on a new study published this week, “even safe levels of sugar could have serious negative effects on people’s health.”

5. Sugar shortens your life, at least it may have subtle biological effects that lead to shorter lives. Research is ongoing in this area, but findings point to higher mortality.

One of the researchers on the Utah study released this week said in the Salt Lake Tribune,

“I think the big takeaway is the level of sugar we readily eat and think is safe causes major health declines in mice. . . . We’re not just talking about some minor metabolic thing. We’re taking about increased rates of death and [lower rates] of reproduction.”

6. Sugar or marry your cousin? A diet high in sugar has similar effects to inbreeding—at least in a recent study with mice. To quote my local paper on this local study: “Would you rather be on the American diet … or have parents be full cousins?’ said senior author Wayne Potts, a biology professor. ‘This data is telling us it’s a toss up.’”

7. Sugar can even make you stupid, or so it appears from a different rat study. National Geographic quoted the study researcher: “‘I was very shocked to see how strong an effect these diets could have on the brain—I have high concern that the foods people eat can really affect mood and cognition,’ Gomez-Pinilla said.”

How I’ve Handled Sugar with My Children

My solution when my children were very young was not to forbid sugar, since I didn’t want it to become the desired thing they binged on away from home, but to give them no refined sugar at home and allow some away from home. I had to have grandparents’ cooperation in this, since they were the sugar pushers.

Now that my children are older and more logical, we can talk through the consequences of lack of nutritional control. We even took a college class together on nutrition to keep our discussions science based. They know how they feel when they overeat junk food or super-sweet food, and they don’t like it. I don’t have to exert MY control as a parent because they are exercising their own self control.

This is not to say that we don’t still have trouble. Having read the recent articles in National Geographic and TIME magazines, I know we have to push our sugar consumption even lower. What we think of as moderation is not moderate. It’s exceedingly high consumption of sugar, and our bodies did not evolve to handle this onslaught.

Don’t just replace refined-sugar sweets with other sweets. Get past the sugar addiction yourself and don’t let it grow in your children. I know that just makes it sound easy, and I know that it isn’t actually easy if you are stuck on sugar. But, your health and your children’s health and normal development depend on it.

Even though it can be difficult, just do it.

Recent articles on the effects of sugar

One thought on “Sugar: 7 Reasons to Break the Addiction”