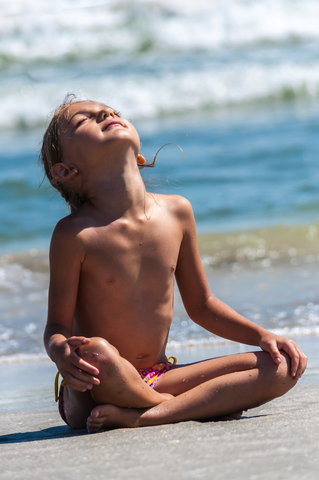 Have you wondered how to teach your child those inner skills that will make life a lot easier—skills like controlling one’s own responses to outside stimuli. Research shows that yoga and mindfulness for children helps them gain that self-awareness they need to control their own behavior.

My father studied psychology in college. He didn’t live long enough to experiment on me, but I have heard funny stories from my older cousins about tests they remember.

My dad was on the young end of his family. He hung out often with his siblings and their families of young children. He was a favorite because he really talked to the kids. He interacted with them. He was genuinely curious how they worked.

One of my cousins told me a few years ago about the time that my dad gave him a candy bar when he visited. My cousin was about 8 years old at the time. There was no catch. He could eat the candy bar right then if he wanted. There was a potential bonus, though. If he could wait to eat it until my dad came back again, he would get two candy bars he could eat right then.

He said my dad taught him self control with that one test.

Could it really be that simple?

The test most commonly referred to when discussing delayed gratification in children is the Stanford Marshmallow Test, but that didn’t occur until the late 1960s and early 1970s. My dad was conducting his test about 1961, so it was probably based on tests published in the late 1950s, since he had died before the Standford tests. Just based on the detail of my cousin’s story and the similarity to the marshmallow and earlier tests, it sounds like there might have been a lot of poking around looking for the origins of self control.

The Stanford tests followed the children to learn that those who resisted the marshmallows had better academic achievement and fewer behaviors considered problematic to parents and schools.

How Can We Help Our Children?

Back to today and our gentle parenting of our own children, how can we teach them self control? If our children are those who eat the marshmallow right away, what can we do to help them?

That is the question asked in an article at the Greater Good Science Center: “What can we do to help the children who just can’t resist the marshmallows?” The answer was published last year in the Journal of Child and Family Studies: “Enhancing Preschoolers’ Self-regulation Via Mindful Yoga” (October 2013).

Teaching the children awareness in the moment resulted in less impulsive behavior and longer attention for classroom activities (compared to students who didn’t participate in the yoga and mindfulness program). Those who experienced the biggest change had started out with the weakest skills in self-regulation. There were no differences at home between the two groups, though.

We can see that self-awareness and consciousness in the moment can help a child to regulate behavior. It won’t work the same for every child, but it can help a child develop skills for dealing calmly with the difficulties they meet.

To help your child learn self control, cultivate self awareness, mindfulness. Talk about this self awareness to keep the practice in consciousness.

To put mindfulness into practice with your children, follow the “Tips for Teaching Mindfulness to Kids” from the Great Good Science Center.