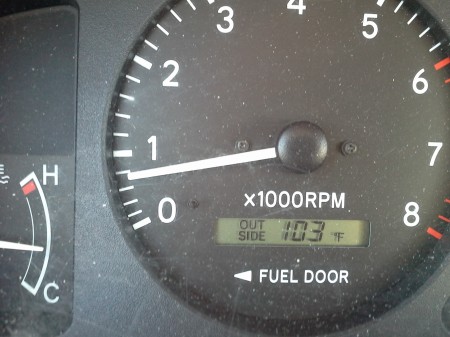 My car thermometer. It was only 103 degrees outside when I got home at 6:00PM yesterday.

Most people know not to leave a child in a hot car, but I keep seeing dogs in hot cars. Here is what you do if you want to help a poor dog in a hot car.

To keep my family cool, I just open every window in the house at night (it’s relatively cool in the shade in the high desert), and we stay inside during the day. On those few occasions when I need to go out, I do not linger outside.

I have seen dogs in cars every day, and I have wondered what to do. Yesterday, a friend of mine saw two dogs in a car and posted angrily on Facebook about it. Fortunately, a police officer friend weighed in with options.

How Hot Does a Car Get

If you wonder whether you should do something when you see a pet in a car, you should.

Keep in mind that your local laws and fines could be different than mine.

Check Whether the Door Is Locked. Before you do something rash like break a window, just check whether there is an unlocked car door. You might find this an easy rescue.

Break the Window. You could take the situation into your own hands and break a car window. Yes, maybe that is the right thing to do, but you can be liable for fines and damages. One person I asked did this. The judge dropped the charges in exchange for her paying a $300 fee. Not all judges will be so kind, and the car owner might seek damages. Think carefully before you choose this option. The woman who did this and paid the fine said, “but I’d do it again.”

Don’t Call 911. Calling 9-1-1 is for life-threatening, emergency situations. Granted, this is a serious situation, but it isn’t a burning building.

Call Dispatch. You should call emergency dispatch for your area. My husband is active in our neighborhood watch. He has encouraged me to memorize the dispatch number. It’s written next to every phone in my house.

What happened yesterday? My friend called dispatch after getting advice from an off-duty police officer through his post. He waited until the police arrived. The car owner arrived about a minute after the police, so there were no broken windows. The owner got two citations for animal cruelty, fines of hundreds of dollars, and will have a court appearance coming up.

Don’t walk by a dog in a car. If you are suffering in the heat outside, you know the dog is suffering in much worse inside. You can save that dog by calling dispatch. 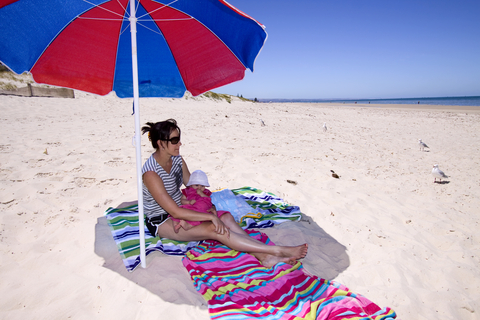 With a heatwave across much of North America, be sure to take care of the most vulnerable members of your family. In particular, take steps to protect newborn babies from the extreme heat.

Every day lately I see heat-related weather alerts. In my city today, there is a red air quality alert, which is a frequent occurrence on the hottest days of the year. With highs in some areas of Canada expected to be in the mid-30s Celsius and highs in the U.S. well over 100 Fahrenheit, a lot of us are focused on keeping our children cool. As average high temperatures trend upward, we can all expect to need more information on how to stay safe in extreme heat.

The heat alone, though, puts elders, pets, and especially babies at greater risk. Babies don’t sweat as much, but they gain heat faster than adults. A baby’s heating and cooling systems are as well developed as yours.

Your baby can’t cool off alone. Your baby depends on you to reduce the impact of summer heat.

Dehydration signs are dry mouth, irritability, listlessness, no tears when crying, or concentrated urine in the diaper. If you see these symptoms, rehydrate. Breastfeed, or, for an older child, you could use fluid replacement (electrolyte) solution.

Heat stroke signs are flushed skin, dizziness, and little or no sweating. If you see these symptoms, start with a cool bath.

Heat rash looks like tiny pimples, often in the creases where your baby isn’t getting as much air circulation. If you see rash, dry the area and keep the air less humid when you can. Consider going diaperless. Heat rash is less serious that dehydration or heat stroke.

If you have any questions about your baby’s health, call your healthcare provider. In this heat, you won’t be the only one with questions. 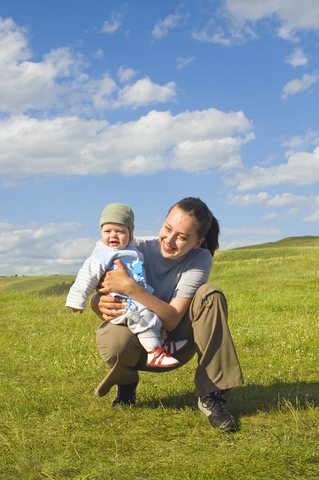 If you are planning to go camping, hiking, or just walking around town with your baby, you will find some helpful tips in our round-up of posts from Eco Baby Steps.

Your Camping with Baby Checklist
Are you ready to jump in? Check your packing list and make sure you have these basic items before you go camping with your baby.

Camping with Cloth Diapers
Long post on using cloth diapers while camping covers what to take, how to wash, and what to do when you run out. Fun personal experience resources as well.

Hiking with Baby
Start out hiking with your baby, and you end up with toddlers and children who can’t wait to explore the outdoors. Tips for safety, gear, and other considerations.

Using Cloth Diapers on a Plane
What you need and how to make it work when you are flying to your vacation and you want to keep your baby in cloth diapers. What works depends on your needs, but this list is a great start.

Travelling with Cloth Diapers
If you haven’t travelled with cloth diapers before, it might seem a bit of a mystery. A lot of parents do use cloth diapers while they travel, though, and they have created very helpful resources for you.

Daycation Exploration with Toddlers
Whether money, time, or the stress of travel has you wanting to stay closer to home this year, you can still create that vacation feeling for children with short explorations. Includes ideas how to make day-long vacations work for you and your children.

5 Tips for Non-toxic Sun Protection for Babies
If you are going to be outside with your baby, especially if your baby is less than 6 months old, you need sun protection. The basics of non-toxic protection from the sun.

7 Tips for a Successful Picnic with Kids
You can still improvise summer fun if you know you have the basics covered. Just a little planning and preparation will help you and your child avoid a hot, sticky meltdown.

Cool Summer Babywearing
Basic tips for keeping cool(er) while wearing your baby in the summer, plus a few recommendations for carriers depending whether you have dry heat or humid heat.

3 Steps to Summer Babywearing Success
Another post on staying cool while babywearing. Walks you through three basic steps for you to find a baby carrier and a carry that will work for you.

Summer in Nature for Your Children
How to give your child enough structure that they get curious about nature and start to explore on their own. Great list of resources.